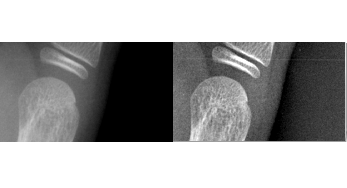 The friendly co-existence of BoneXpert and image post-processing

The radiographs produced in modern digital radiology departments have often use “image post-processing” by software associated with the modality itself. The main purpose is rendering the details more visible for the human eye. Twenty years ago, the method of choice was unsharp masking. It enhances edges at a certain scale (i.e. distance) e.g. 0.4 mm. However, this is useful only when used moderately; otherwise it leaves clearly visible dark “halos” around white objects. The figure below illustrates this, showing a raw image and a version with unsharp masking.

In 1994 Agfa invented multiscale image contrast amplification (Musica). It enhances edges at several scales at once, so that the halo effect spreads and does not bother the human eye. In addition, it reduces edges at very large scales, which is the same as reducing contrast variations over large distances. This in turn allows scaling up the image grey levels to improve contrast.

The figure above also shows an example of multiscale contrast amplification. Compared to unsharp masking it gives a more pleasant image – it avoids focusing on one spatial frequency and instead gives room for details at many scales. The last example in the figure shows extreme use of contrast amplification. The “long distance” contrast differences almost disappear completely: the grey level inside the hand (at A) are now much darker, while it is much lighter in the background (at B). Such a strong amplification seems unnecessary for hand radiographs. It may be useful in e.g. thorax images.

Other vendors of CR and DR systems introduced similar multiscale techniques as an integral part of their modalities. The post-processing names for some modalities are:

When developing methods like BoneXpert for quantitative image analysis in clinical practice, one needs a strategy for coping with the variations in image quality.

It is easy to make the image analysis invariant to uniform changes in brightness and contrast described by linear rescaling of grey levels.

The variation of signal-to-noise ratio stemming from variations in dose (mAs) and voltage (kVp) presents a larger challenge. It turns out that the BoneXpert bone age measurement is very insensitive to variations in noise level; this is because the used image features are relatively coarse-grained – BoneXpert is not looking for tiny lesions as in cancer screening.

The variation in sharpness was a challenge for BoneXpert before version 2. BoneXpert’s measurements depended slightly on the image sharpness: blurring the image or sharpening it by edge enhancement led to a slight change in bone age. As the child matures, the growth plates gradually fuse, and finally completely resolve. Edge enhancement therefore makes the growth zones appear less mature. As a consequence, BoneXpert arrived at a slightly smaller bone age, and edge enhancement had to be kept at a minimum before version 2.

Post-processing algorithms can alter the images more dramatically as they become more sophisticated, without creating unpleasant artefacts. As a result, image post-processing is the strongest source of variation in image quality in CR and DR images seen today.

A quantitative image analysis method like BoneXpert can take two approaches to coexist with the image postprocessing. One is to configure the modality to generate two images: a raw image for the image analysis, and a post-processed image for display. Computer Assisted Detection (CAD) for mammography use this approach for methods where the two versions are often denoted “image for processing” and “image for presentation”.

Setting up such a dual image data flow is impractical for bone age hand X-rays, which are just a small fraction of the images in general radiology. Instead a friendly coexistence with image post-processing was devised, composed of three elements:

1) The radiology department sets up a protocol for hand X-rays for bone age. The contrast amplification is turned off, or at least kept at a moderate level.

2) BoneXpert estimates the sharpness of each image. If it is above some threshold, the image is rejected for analysis. Thus extreme contrast amplification as in the last example in the figure is not accepted.

3) The BoneXpert algorithm for bone age and BHI is enhanced so that it compensates for variations in sharpness. With this correction, it allows a larger amount of postprocessing than before.

Radiologists accept that strong post-processing is unnecessary for these hand X-rays. It is still best sticking to a “classical” look of these radiographs. This also better facilitates manual rating with reference to the Greulich Pyle atlas. Remember that the atlas consists of plain X-rays with no contrast amplification.